taskmaster4450 in LeoFinance • 2 months ago

This is a question that was asked for years. Many of us see the value in blockchain yet there was always some issue as to what it really did. Sure, we can talk about decentralization, something that could be done on any centralized system. Thus, as a data stack, it really didn't offer anything novel.

Of course, from an ownership perspective, it provided a great deal. This is something that became evident over the last couple of years. With immutability comes the ability to not have content deleted. One could also own his or her account.

There is one area where decentralization is vital. It is something that most of us overlook yet it ties into the equation of being able to speak freely. This literally deals with speaking since it is poscasting.

We saw this go from nothing to millions of different podcasts over the past 20 years. It is something we take for granted since few of us consider what is truly taking place. Instead, we make our recordings, upload them to Apple or Spotify, and then be done with it.

Do we really consider how centralized that is especially in light of the fact that podcasting was started as an alternative to the centralized, mainstream media?

There is another piece to this puzzle that gets even more interwoven: the indexing. Much like Google searches, if the indexes are controlled and manipulated, people can be silenced even while out there saying what they want. After all, if nobody knows you are around then you are of little threat.

Apple is the big player in this industry since they were basically handed the keys to podcasting indexing. Over the years, they have done a decent job allowing what is to be. However, they showed in the last few years to be susceptible to the pressures of silencing voices that are not liked.

Here is where blockchain enters the fray. @brianoflondon came up with a way to tie podcasting indexing with blockchain. This is being done right now on Hive. The idea behind this is to ensure all podcast updates are open and available. By incorporating Hive, one only needs to monitor the blockchain to see what updates come through.

This all starts with @adamcurry and @davejonespod starting an alternative called Podcast Index. It was formed to provide the feeds to anyone who wants them without manipulation or censorship.

We also see a financial consideration that enters the picture. Using the present system can get very expensive. There are usable resources how there but as a recent article by Brian shows, there are major drawbacks.

WebSub is a wonderful technology for the blogging world, and for small subscription bases. But, there are four main issues that make it less than ideal for the open world of podcasting:

A final issue is that of reliability. In our experience, hubs have proven to be unreliable at times. Especially the free ones. We have seen what appear to be outage periods, or just silence.

A better solution than subscribing and re-subscribing constantly to individual podcast feeds is for aggregators, directories and apps to just subscribe to a single firehose of all podcast feed urls that publish a new episode. Podcast publishers notify podping.cloud that a url they manage has updated. The podping server validates that publisher's identity and then writes the feed url to the Hive blockchain.

The bottom line is that podcasters and hosting companies just send a GET request with the url to a single web address, and everyone else in the industry can see that update within a few seconds with no subscribing (or re-subscribing) required by anyone.

This application started about three weeks ago. It is posting new podcasts every few seconds as we can see from this screenshot. If you wish to follow along, you can view Podping here or watch the Hive account on Hiveblocks. You will see the url of the podcast as well as the transaction number associated with each.

To understand how this all works, including how it is tied into Hive, we have this flowchart. 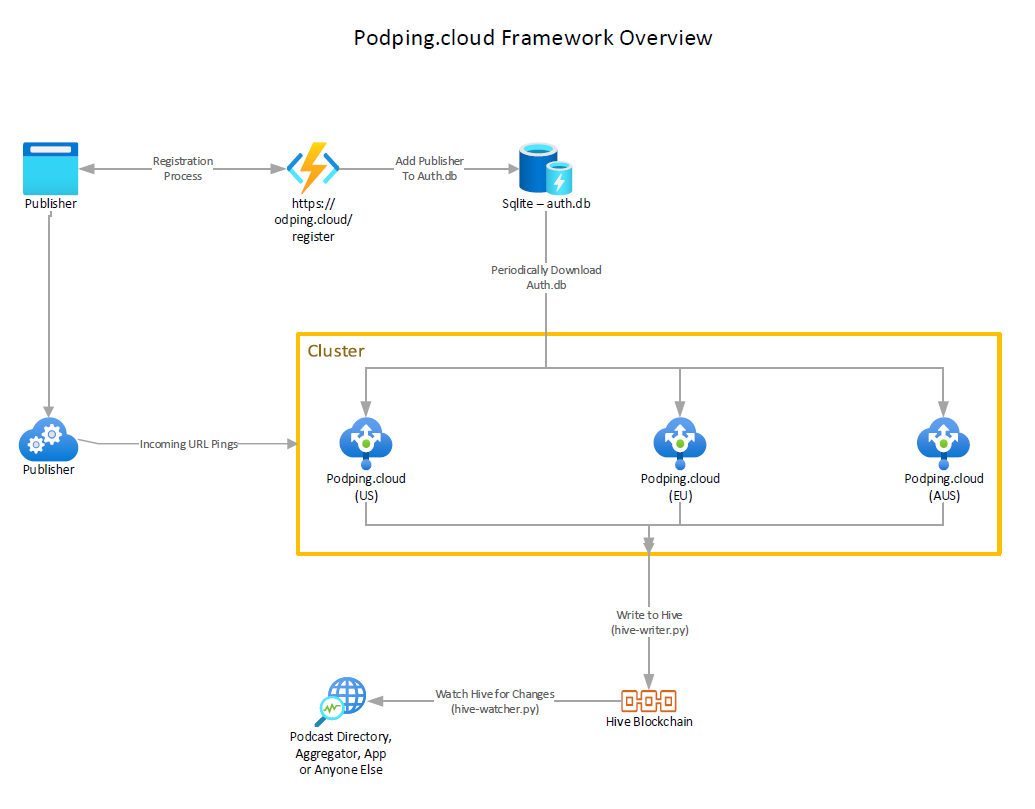 Here we see a system that eliminates the need for polling of RSS feeds. The challenge with this is that the RSS feed system is controlled by a couple entities plus it gets very expensive to get all that information due to bandwidth costs.

As we can see towards the bottom of the chart, one only needs to monitor Hive for all updates that are placed upon the Podping.cloud.

This means that it is affordable even for the smallest of Podcasting applications providing even more incentive for other players to get into the game. As the cost of aggregation goes down, more can utilize the service. We can see how the present system is moving away from that, catering to those with deep pockets.

As an aside, think of all the other areas where data aggregation is very expensive, meaning only a few large sources can provide the data. One that comes to mind is stock market pricing. Imagine if something like that was built on Hive also.

Even though this is a relatively new project, it is starting to take off. There are already a number of entities that are providing the data as seen by this chart. It comes from a post made a couple days ago. According to the latest entries, we see a URL count of 10K that were posted in 12 hours. Considering there are about 2,000 posts (custom JSON) made to Hive, we can infer there are 5 URLs contained in each post. Those shows how many the system can actually handle. In other words, Hive can operate as fast as the cloud is spitting out URLs.

Judging by the numbers, we can conclude that we have not seen the largest players in the industry yet. When dealing with roughly 20K URLs per day, that is a lot smaller than the total number of podcasts posted each day. If we consider the fact there are millions out there, with hundreds of thousands of them live, we can see the number updated daily is likely to be a larger number.

Either way, the project is off to a good start. This could easily start the process of transformation in data aggregation. The podcasting industry is obviously ripe for disruption, something that might be happening now.

Perhaps we will see this take shape where some of the larger players in the industry cannot overlook it.

We also might have found a very valuable use case for Hive. What makes this possible is the fact that transactions are feeless.

To do something like this on Ethereum would cost more than $100K per day.

We look forward to updates on this project.

This is huge for Hive, although I could argue that no Blockchain of this type (content creation) will be free of any kind of censorship or content control, too many dark content and twisted minds out there. Still I think it's a good idea to offer an alternative to all the current platforms. Following and waiting for more content from @podping

The blockchain doesnt have the content, only the feed of what is out there. Hive only carries text.

Absolutely I believe that Hive is really setting the stage and laying the groundwork for absolutely huge moves that are going to be coming out I believe in this technology greatly.

And I worked really hard on staking and throwing other people rewards.

Me and puppy dog really appreciate your work thank you very much. This post really got the dog excited I see. Well everyone needs to relax at times.

Hopefully we have an amazing time together for years to come

I was reading pooping for half the post :))) Good to see another promising project on Hive

LOL you made me look to make sure it wasnt full of typos.

Good to see another promising project on Hive

Not going to be a huge one to pull users in but one that is showing the use case for the blockchain. Plus it could help to get some bigger companies using their services, perhaps adding some exposure.

sorry I thought it was clear that I'm just a dumbass :))

Nah with my ability to mistype, it is possible I could have written that in there without noticing.

This is a good thing for the entire community but I don't really know how much it will help. I am hoping those podcasts also have 2x speed for those of us who prefer to listen to things faster.

The podcasts are still resident where they always were. That is not changing. Just the update feed system is being altered.

Yes I think we are seeing some incredible progress. A lot of use cases are popping up.

I am eager for a podcasting platform to become available on Hive. I've had to input my recordings into video files for hosting on 3speak to get around the limitation. It works fine. But, it's just an extra step. I'll be glad once we are able to host our own 3Speak nodes. That's partly why I prefer audio. The file sizes, and bandwidth requirements, are smaller.

I'm fairly sure that we already have one.

Check out this site for podcasting.
https://aureal.one/

Close. I was excited as it has progressed since the last time I saw it. You still need to host your podcast elsewhere and provide your RSS feed. Not quite like 3speak with video.

An awesome showcase for our blockchain indeed. Please help support the DHF proposal @brianoflondon has put up: https://peakd.com/podping/@brianoflondon/podping-and-podcasting-20-funding-to-put-hive-at-the-center-of-global-podcasting-infrastructure

Thanks for this! Excellent distillation of what @podping is doing.

I've just put a proposal into the DHF so feel free to check that out.

Will take a look. I hope others get on board with tis. It could really be opening up a door for Hive as a major data aggregator.

Wow this was really a deep dive into decentralized podcasting, with many terms I am unfamiliar with, but I learned a lot.
I think I will try my hand at Podcasting.

Well it isnt podcasting as much as the notification system and how it is for those hosting the podcasts like applications.

Congratulations @taskmaster4450! You have completed the following achievement on the Hive blockchain and have been rewarded with new badge(s) :

Blockchain is certainly the future when it comes to innovations, it's been an exciting journey to find new ways to keep accumulating more coins on a trusted multi-coin wallet like that of https://atomicwallet.io/, where users have the opportunity to keep a variety of coins on a single and secured wallet with ease.

Awesome news! This is a next step for popularizing Hive among non-crypto users. I wonder what could be on Hive in the next 2 years or so.

As someone who consumes a lot of Podcast content, I've loved the idea of this project since I first heard Brian talking about it.

Add another real-world use for blockchain tech that Hive can solve better than anyone else on the market.

This is brilliant! Decentralized centralization. !BEER

Hey @taskmaster4450, here is a little bit of BEER from @fiberfrau for you. Enjoy it!