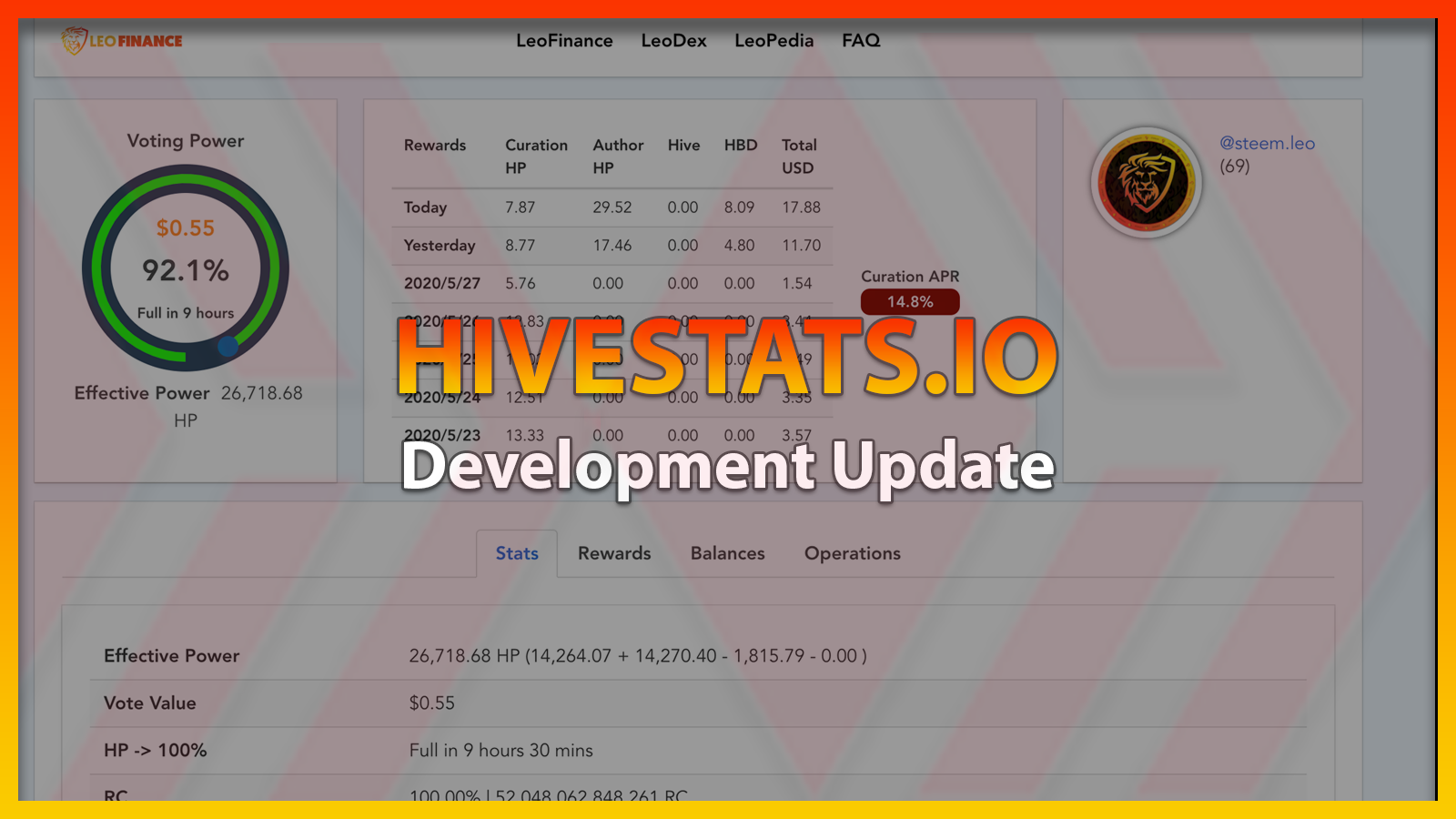 Just about 2 weeks ago we launched the https://hivestats.io app for the Hive blockchain. This initial release was our very basic structure for the site — a minimum viable product that allows us to freely add/modify anything on top of the base layer. In this update, we'll talk about the latest release of the site and share our V2 roadmap.

The initial release of Hivestats had a few performance issues. Mainly caused by an excessive load on the browser which caused some lag/freezing issues.

They weren’t fatal errors and could be fixed with a simple refresh of the page every once and a while. Still, having a slow web app is one of the most annoying things and that’s why rolling out performance upgrades has been our top priority.

We have been working on a few ideas for increasing the page speed and decreasing the browser load. Our temporary solution has just been rolled out in today’s update of the site where we removed the delegation data.

Removing the delegation data and making a few small changes to Hivestats allowed us to cut down the page load by ~2-4x in most cases. I have been playing around with different data sets and clicking around the site to test out the prior freezing issues and haven’t encountered any since the update.

Hopefully these small performance updates make the Hivestats experience far superior than the initial version we launched with.

V2 Roadmap & Rolling Out Updates As We Go

As I said, Performance was the #1 issue that we focused on out of the full roadmap for V2. We’re now working on a few more ideas for performance enhancements while getting started on part 2 of the roadmap.

In the initial post announcing Hivestats, we mentioned V2 briefly. Since then, we have finalized the roadmap and as of today have completed our first objective which was to reduce the Page Load and improve the overall Page Performance. We’ve now started work on #2 (Hive-Engine Integration).

Here’s the finalized roadmap for the V2 update to Hivestats. As we complete various milestones on this list, we’ll roll out new features accordingly:

We’re always open to suggestions and want as much feedback as possible. The feedback about page performance was essential in moving forward with V2 - shoutout to everyone who tested the site and reported the page performance issues. Hopefully those have been resolved for the most part and you continue to see faster and faster load times as we explore other enhancements.

Feel free to drop a suggestion down below or via discord. If we see something that would be a good fit to add/change to the site, we’ll add it in to the roadmap for future updates.

I was waiting for something similar to Hivestats for some time, and with this V2 it will exceed my expectations! Really good job guys!

Thank you @resiliencia! Appreciate that :)

There will be some minds blown when V2 is complete. Many of these features are things that I dreamed of as a full-time author/curator back on Steem and now we're finally making them happen with Hivestats

Me too! Can't wait to show off some features for Hive that have never been seen before. They'll 🤯your mind

Lovely work with hivestats by the way.

This is terrific. I'll surf the site and will publish my feedback. Meanwhile, I hope that the account creation option would allow us use LEO to create Hive accounts or make provision for instant buy of HIVE at the highest Buy price to create a new account.

Thanks @uyobong! Always appreciate your feedback!

To be honest, I hadn't thought that far ahead about account creation. Making an option where users could create Hive accounts using LEO is an amazing idea. I'll write some plans for that in a future update 💪🏽

Yes that's an important feature. We've temporarily disabled it as delegation data was the primary cause of the page speed issues. We have a solution for pulling better APIs/data feeds and once we implement that, we'll bring back delegation in/out data 🙏🏽

It would be a lot easier if we get the delegation list easily from the API but I guess it is still under development. By the way, why don't you use HiveSQL to bring that data?

We're considering HiveSQL or potentially creating our own APIs so that we can integrate other functions in the future.

I personally think we'll use HiveSQL short-term and then create our own API/database in a few months as we have more development features added that will need more complex calls. If we do go that route, we would also be able to provide APIs for other apps/users on Hive. We'll keep putting out updates about that as we consider our options

Ya that will be awesome. If we can get a public API it will be great. And ya I agree HiveSQL can at least be a temporary option until you come up with your own API. All the best by the way for your work. Cheers!

No suggestions at this time, just a note to let you know I appreciate the tool and do make use of it. I do like the APR so please do not do away with that.

That's great to hear - I hope the future updates will also make your use of it even better moving forward :)

The APR is one of my favorite features as well so that's not going anywhere! In fact, we're adding other features that are similar to that, so prepare yourself for some killer stats

Just keep the roll outs coming and things will fall into lace.

The H-E token info will be wonderful to see. I am also looking forward to whatever else you have planned in terms of features.

We were thinking about rolling everything out all at once with a V2 update (like we usually do for LeoDex), but I changed my mind about it after we compiled the finalized roadmap. There's a lot of stuff on there and each component will be a major upgrade in-and-of-itself. After the roadmap for V2 is complete, Hivestats.io will basically look/feel like an entirely different website with 3x+ as many features as the original version. 🦁

It works much faster than before!

Glad to hear it! Thanks 🦁

It is pleasant to me! It is very similar to the service that remained on the past blockchain.

Thanks for the heads up update on this Hive Stats

These HIVE / LEO tools are great! Thanks for all your hard work in making them!

Thanks for this tool it will be very useful for all of us.

Can you please tel ETA of point no 5 because I am so excited for this update. I request you kindly do it ASAP. If we get Account Recovery feature on the website then it will be cool.

Your work have been impressive since the very beginning. Are you even profiting from your work on Steem and Hive?

Thanks for the hivestats tool! Very cool.

A cool little feature that would be interesting on that page would be a real-time Hive Power widget that shows your HP increasing with interest. There used to be a website that did this for Steem but it no longer works.

It would show your SP out to several decimal points constantly increasing. It was located here: https://steembottracker.com/steemdash/?account=nuthman but is broken now.

Actually, after I wrote this I just copied the repo and made it work on Hive. You can see what I mean here: https://hive.nuthman.com/

Some of my friends struggled to set up their Hive account in a way that made them feel confident about the blockchain. They were complaining about the lack of explanations and tutorials.

On the other hand, I loved your guide to Hive where you explain it from the different user viewpoints and how you cover everything clearly. You are easy to listen to.

I think it would bring tons of value to Hive if you create, or assemble, good video tutorials on how to complete account creation, keychain/hivesigner set up, hive.blog/peakd.com sign ups, and a little bit about how to use communities, then put this on hive.io in some dedicated "How to set up" page.

Are you going to join the referral program proposed by @hiveonboard?

Best Hive app I have seen in a long time. Moving to HIVE I missed steemworld.org and now I have a replacement.

I will be supporting you.

One of the on-going problems I have been having with hivestats, it that in the operations tab Today never shows up. I can click the other day tabs like yesterday, 2 days ago, etc and the stats all pop in right away.

I use peakd for on chain surfing, and sign in method is keychain. This has been an issue for me since almost day one.

I don't know if it is a glitch or not, and I do like the program/page layout.