WLEO Has Been Listed on Coingecko and Blockfolio!

leofinance in LeoFinance • 9 months ago 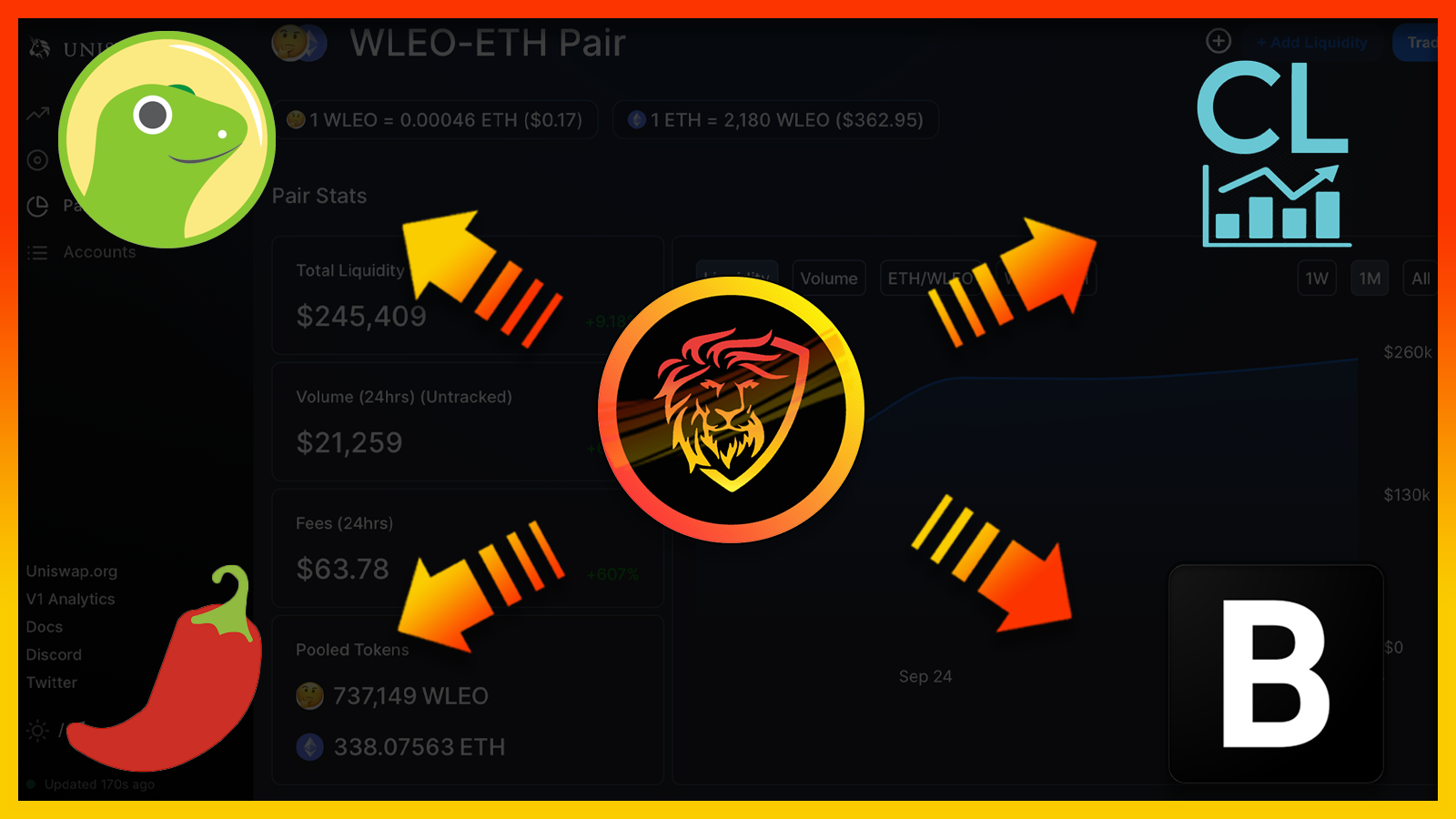 In the past, we've mentioned the myriad of benefits that come along with having an ERC20 token. If you don't know, WLEO is the ERC20-equivalent to the LEO token here on Hive.

Users can seamlessly wrap and unwrap LEO into wLEO (and vice versa) in order to trade WLEO on Uniswap and (in the future) interact with other Ethereum-based applications and protocols.

One of the incredible benefits to having an ERC20 is the fact that it is an acceptable token format on nearly every exchange, coin aggregator and tracking app.

Having an ERC20 allows you to get your foot in the door. How you choose to approach these exchanges and aggregators then becomes an interesting problem to solve.

I woke up this morning to my phone blowing up with messages on Discord, Telegram and Twitter. After a few minutes, I realized that Coingecko, Coinpaprika and Coin-Logic all listed us in the middle of the night (in my time zone, anyway). My phone has been blowing up since the listings with new contacts from smaller exchanges wanting to list WLEO, communities wanting to engage with WLEO and people genuinely curious about what the hell WLEO actually is.

All this increased interest is exactly why we pursued WLEO so heavily in the first place. The motto of this entire launch has been to step outside of the Hive ecosystem and shine the light on our project so that we can bring new people into the fold and onboard them onto the platform. Our application to list WLEO on Coingecko was approved just a few hours ago. You can find our token by heading over there and searching "WLEO"!

A few users like @onalfa have mentioned concerns of the LEO token name - since there is another token by that name in the top 50 crypto market cap list. This issue has been raised several times since the start of the LeoFinance project about 15 months ago. WLEO allows us to disengage from that branding to a degree and show that our token is a different project. Perhaps its a bit of a double-edged sword since some will recognize that name but some may also have a bad impression of what that name carries.

Coingecko has been nice enough to add a notice above the token which differentiates it from the other LEO token on the rankings: I don't know about you guys, but I'm a compulsive refresher when it comes to crypto prices. I like to track my portfolio and see how the currencies I know and HODL are performing several times a day.

What app do I use to track that? Blockfolio.

What cryptocurrency can I now track? WLEO.

I love being able to see the WLEO price here on Blockfolio amongst my other favorite holdings. It's fun to see it on the list and you can also track your personal holdings of LEO/WLEO.

Keep in mind - this tracks the WLEO price on Uniswap which has proven to be the leader in terms of price action anyways. The HE market place (because of it's inferior liquidity) now tracks the price of WLEO.. which is priced against Ethereum.

So when ETH goes up, WLEO goes up in value (since our Uniswap pair is WLEO-ETH). I'm extremely bullish on Ethereum and ETH-based apps in general so being priced in Ethereum is a dream come true. Being backed in ETH will prove to be an incredible asset in the future - and it's already showing the first inklings of this as our price has risen alongside the rest of DeFi/ETH. 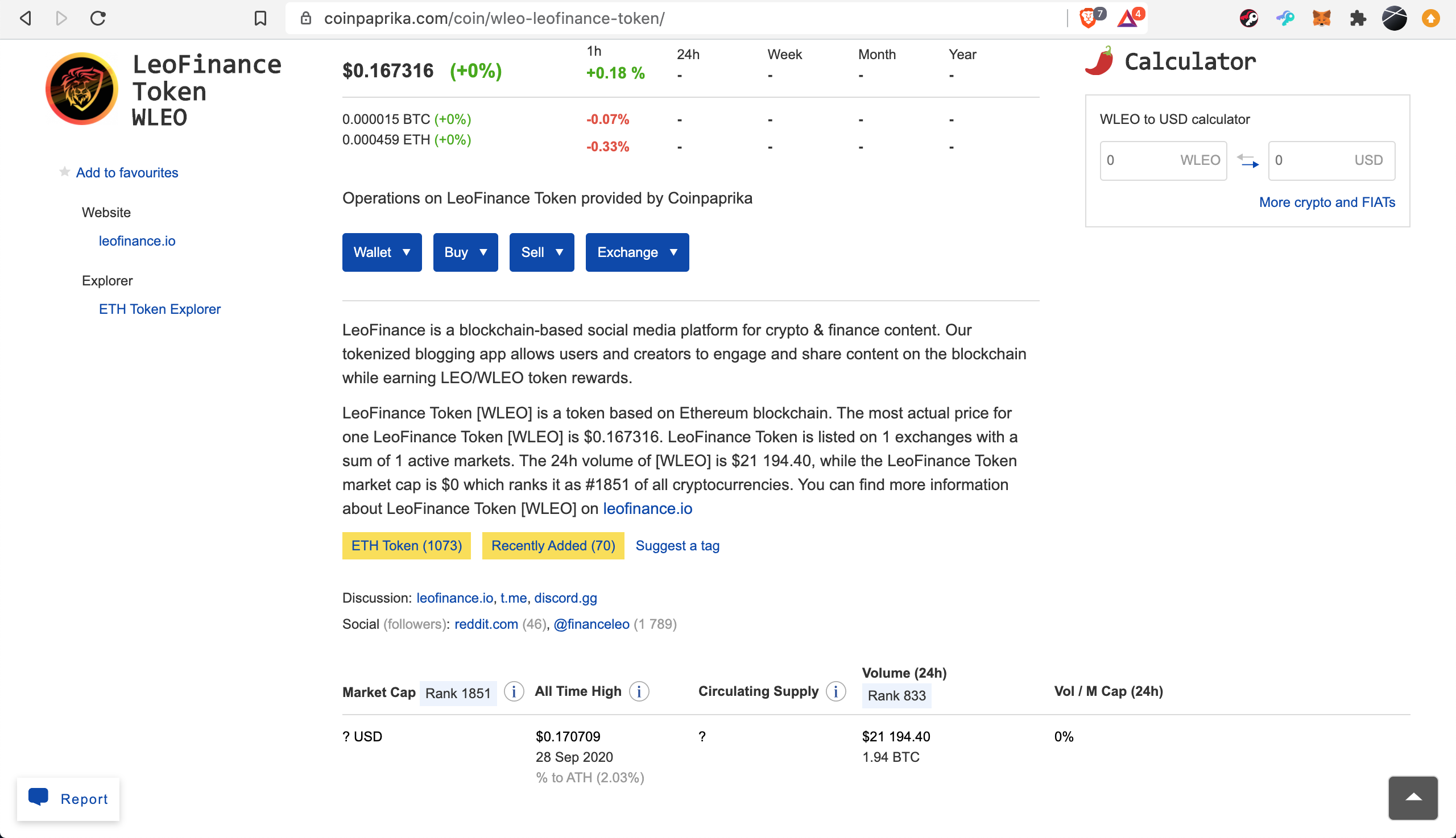 @trumpman suggested that we apply for a listing on Coinpaprika. It's another coin market cap site and a great touch point for new users to find out about WLEO and LeoFinance.

They accepted our application this morning and listed us as "LeoFinance Token (WLEO)".

You might notice the MCAP being "?" on these sites. I'm emailing back and forth with both Coingecko and Coinpaprika to update this figure. The initial listing misses some of the details like circulating supply, which have to be added after the listing is initiated. So.. market cap coming soon.

I'm not intimately familiar with Coin-Logic, but I saw a tweet earlier today that WLEO was listed on there and was excited to check it out.

Their site is a refreshing take on coin market cap rankings and it's great to see WLEO amongst the list. Just another demonstration of the power in being an ERC20 token.

We're now getting the benefits of being on Hive: social features, 3 second tx times, free transactions..

Simultaneously, we're getting the benefits of being on Ethereum: accessibility, liquidity, volume, attention..

There you have it. 4 new places where you can find WLEO / https://leofinance.io and our platform than we had before. The vision that we laid out for WLEO is starting to come more and more into fruition.

The goal of our project is to create a hub for crypto and financial content. To onboard new users and bring people into the fold of web 3.0. Being listed on as many websites, exchanges and apps as possible helps us achieve that goal by continuously bringing in new traffic. 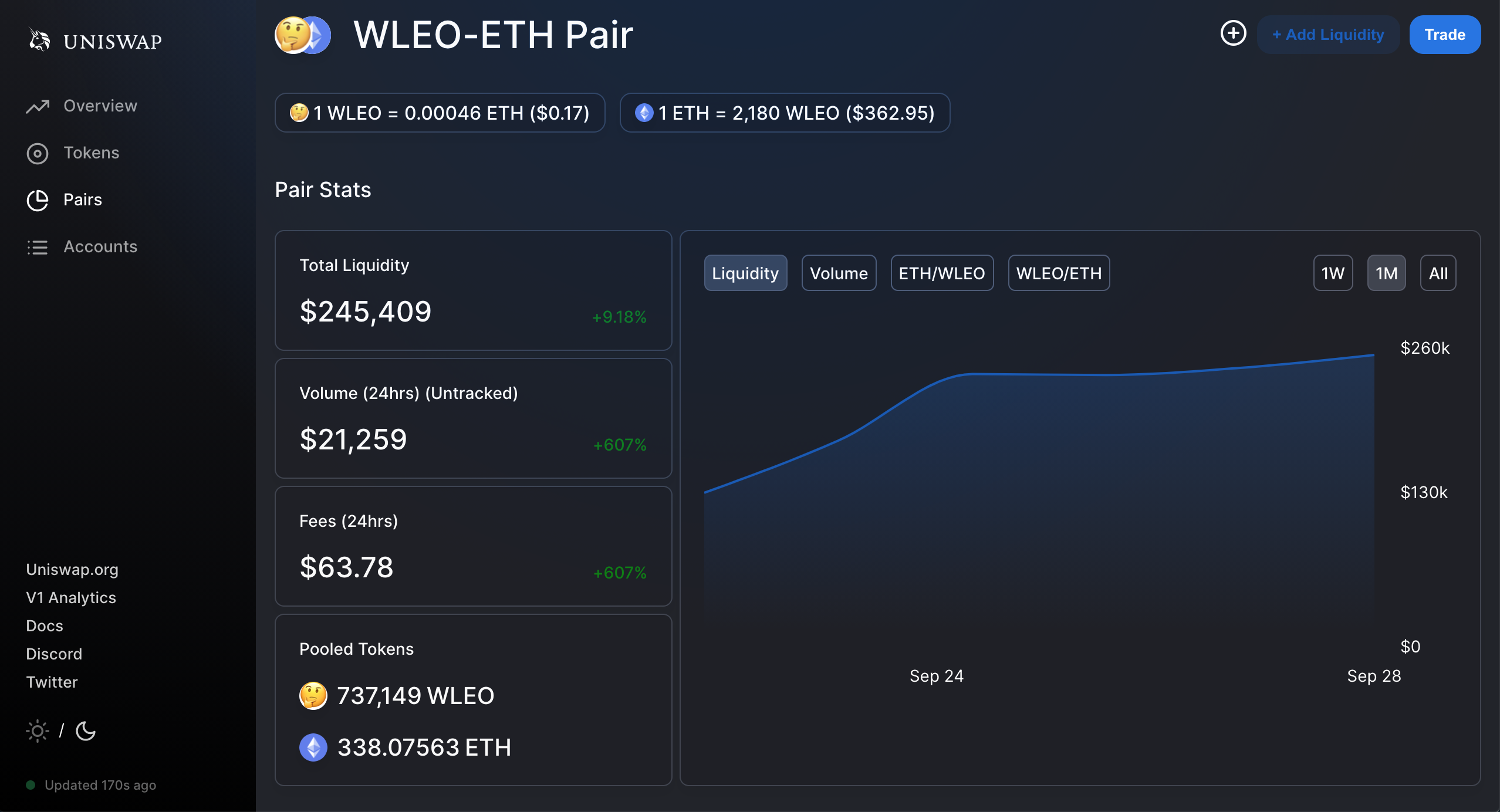 The Hive-Engine market has also seen a boom in activity. Now that users know they can actively trade on both HE and Uniswap, there are a lot more opportunities to do short-term or long-term trades for a profit. Liquidity is a helluva drug! 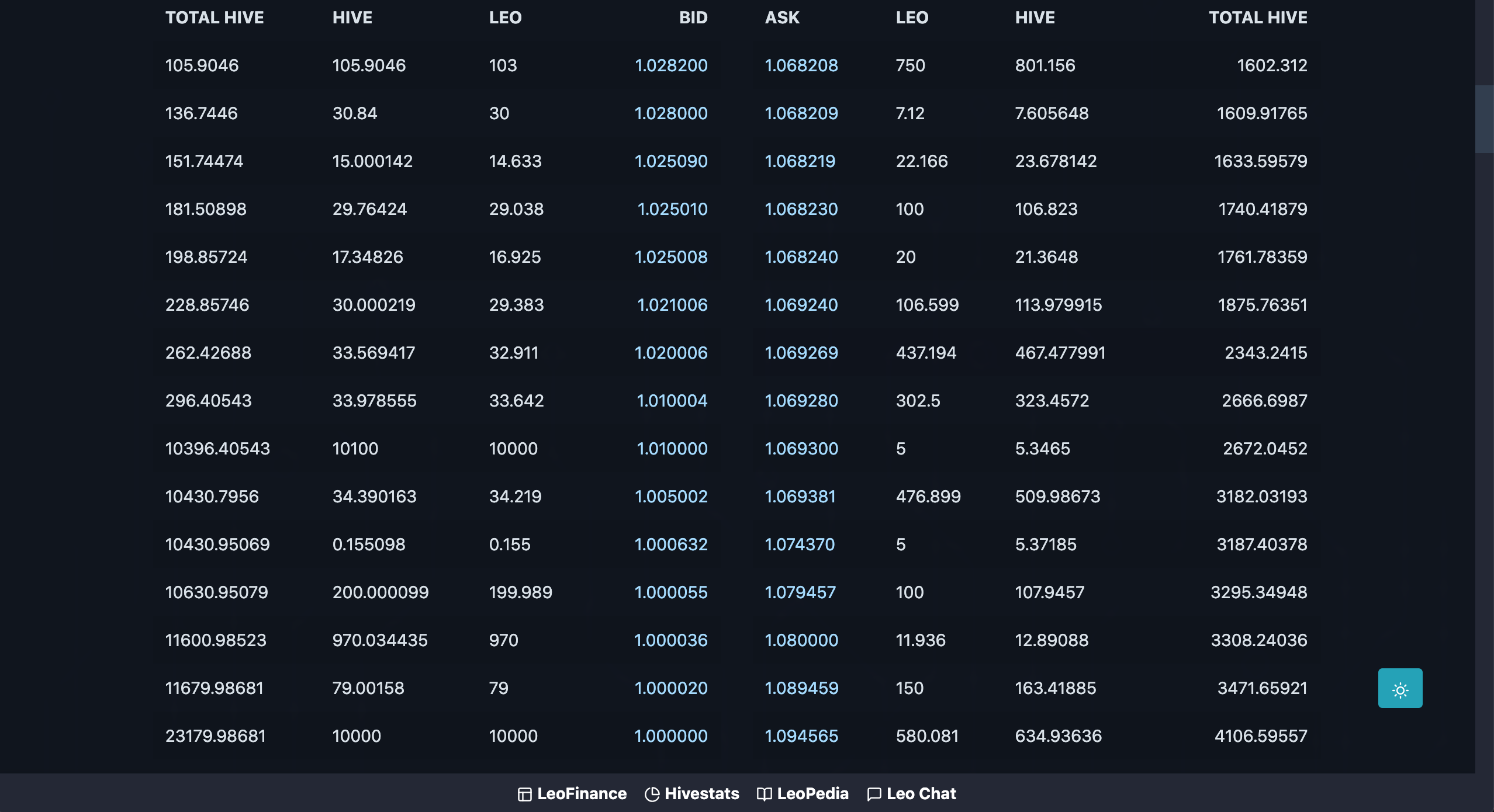 Now you see the first phase of our WLEO launch playing out:

Fun times! I hope everyone is enjoying the new reality for LeoFinance. Having this level of liquidity, volume and attention on our project is an amazing feeling. I can't wait to unveil the new release for https://leofinance.io this week where we introduce the first iteration of cross-blockchain accounts.

Earn LEO + HIVE rewards by creating crypto/finance-related content in our PeakD community or directly from our hive-based interface at leofinance.io or LeoFinance Beta

The circulating supply is not added on CoinGecko and I think total supply is also wrong?
Because of this we don't have a market cap and thus we are not "ranked".
The market cap should be $840,157 as of now.

We're emailing back and forth with Coingecko right now. Sometimes their listing process starts out with a basic listing - missing many details like MCAP/Supply - ours is even more complex because it's a cross-chain token. Hopefully we can add the details soon.

listing it on coingecko seems like a huge step to me, congratulations to the whole team

It's a huge step forward and yet we're at the beginning of the path.

Congratulations @leofinance! You have completed the following achievement on the Hive blockchain and have been rewarded with new badge(s) :

Expansion expansion expansion. These are the times when the community can grow exponentially, hopefully the entire ecosystem will hold in place for the expected onboarding. Sweet plan laid ahead and great seeing it come to fruition step by step. This is awesome. I like the fact that it was added to @coingecko the most because they are amazing by being active on Hive.

Congrats, how about renaming "Wrapped LEO" to "LeoFinance" on @coingecko to not confuse the token with the "LEO Token" in order to remove the notice/warning?

I love the progress!

This is great news. Now i can add my LEO to my Blockfolio app!!!!

The LEO team never stops! Keep working hard guys, as the rewards of months of dedication are coming.

Hey, more good news of the wLEO token being listed on more and more exchanges. Very exciting time to see this token rise outside and shine on te ERC-20 DeFi landscape. Our project seeks to motivate our community to develop content in different branches of life. It doesn't matter if you speak English or Spanish, our foundation is based on the principles of balance, harmony and consciousness. Click here if you want to know more here

Our account is supported by LOTUS, so we also reward with the lotus token.

DELEGATE to @adiwathrive and receive our support with upvotes, reblogs, mentions and contests where you can win in HIVE and more.

We also recommend you to follow @naturalmedicine and @tribesteemup communities that inspire personal growth.

Shoutout to @khaleelkazi and @trumpman for getting these big ones done.

How about that instant traffic spike! Most importantly, I'd say that 99% of it is from those outside the Hive ecosystem.

Very impressive!
WLEO has brought huge attention to the token and I wish you continued success in growing liquidity, trade volume and hopefully increasing membership on the platform!
Go Leo

Congratulations! This is wonderful news. :)

Thanks for the mention of coin-logic.com. That’s my little market data project I have been working on for a while. We are using @coingecko for our data so when it showed up there, it showed on my site. I can change the description on my end so if you want a specific description on coin-Logic on the detail page, just let me know, right now it is just the generic coingecko description.