PancakeSwap has continuously building in the last period introducing new features on their platform, like prediction markets, IFOs etc. They started as a Uniswap clone on the Binance Smart Chain, but as times progress they have been building and making their own mark on the industry.

The low fees on BSC and the dynamic tokenomics, ease of use has made this platform attractive to new and old users. They have outperformed Uniswap in most of the metrics, except the market cap 😊.

Let’s take a look at some of the data! 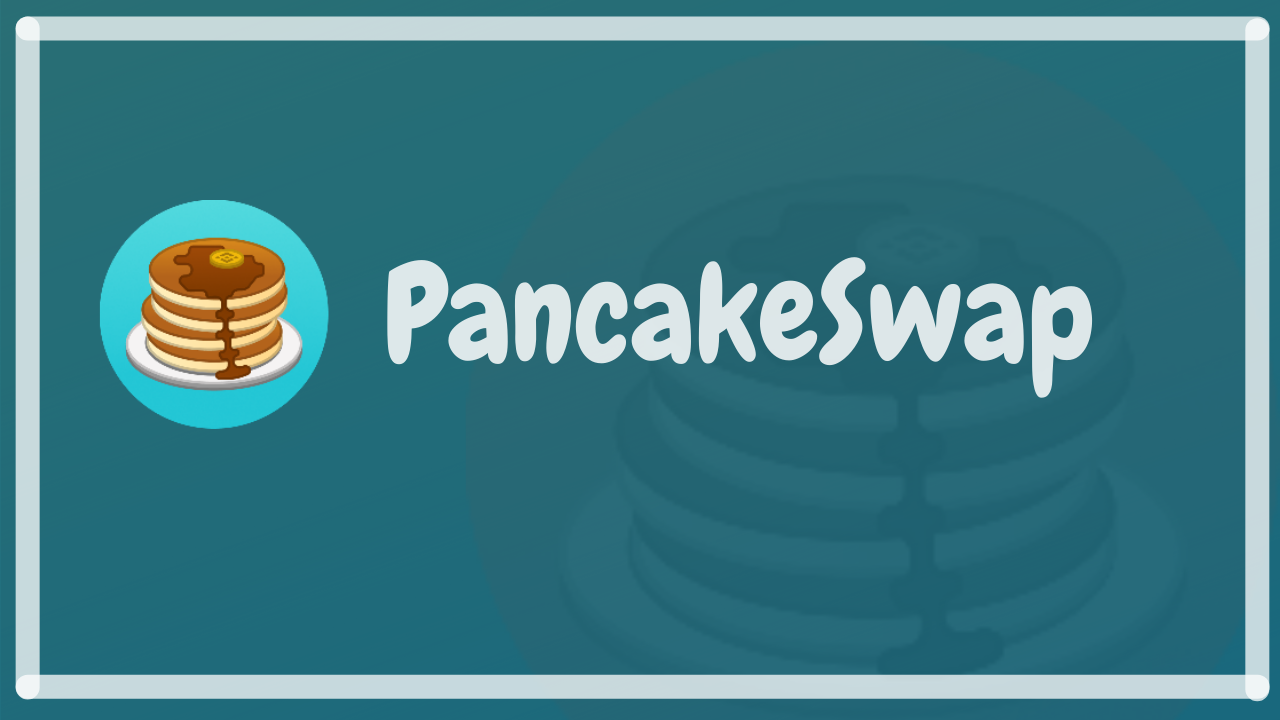 Here we will be looking at:

PancakeSwap has been around since September 2020, but it started to take of in December 2020.

Here is the chart. As we can see up to January 2021 the trading volume on Pancake was quite small in terms of hundred of millions. The in January it started to grow and really exploding in February 2021, reaching more than three billion.

A short period of consolidation and the a strong up move in April and the beging of May with a ATH in TVL of 10B. A correction followed, with the overall correction of the market and now PancakeSwap has around 7B in TVL.

Here is the chart for the trading volume. 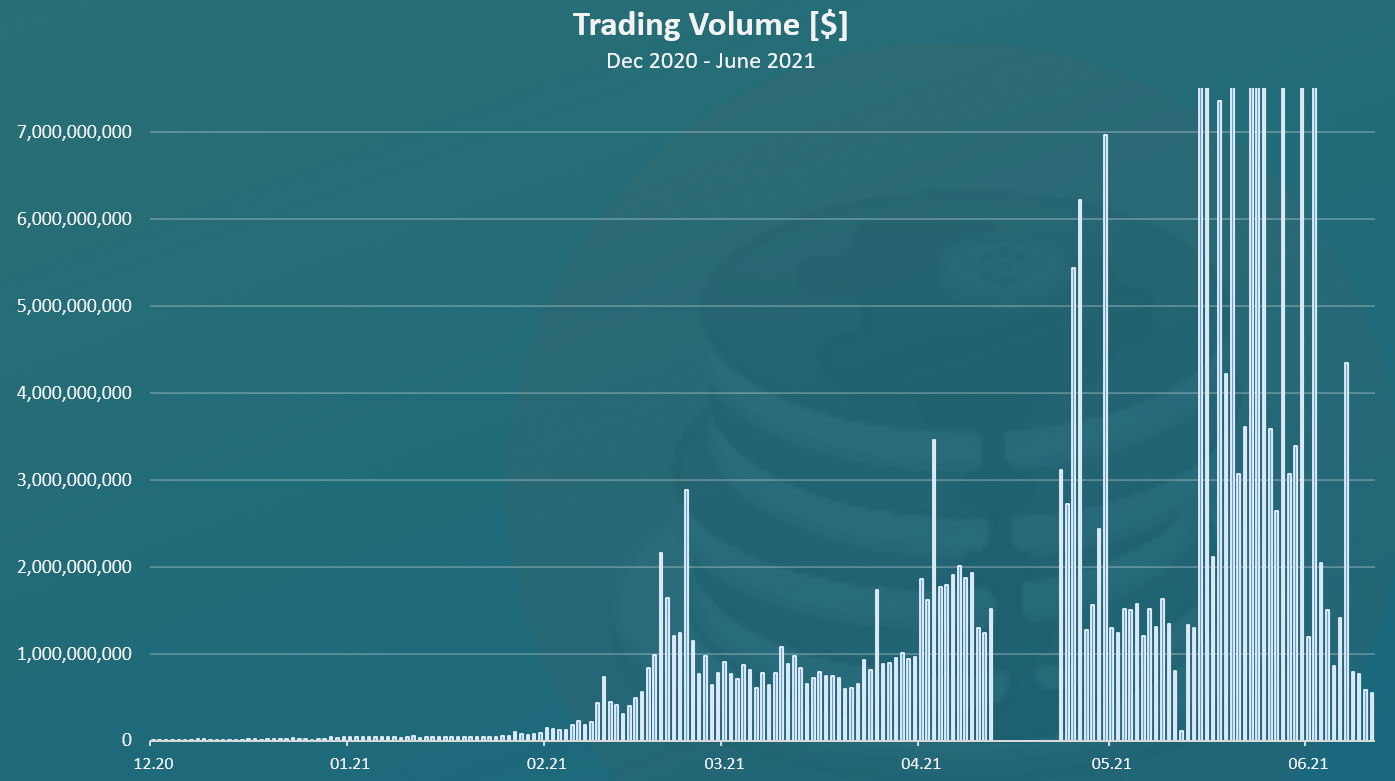 This is quite a volatile chart with some data missing as well.
We can see that it follows the TVL overall with a strong growth in February 2021, and even higher uptrend in April and May. What interesting the trading volume hasn’t dropped as much as the TVL, except in the last few days.

The chart for the number of users/wallets looks like this. Disclaimer: This chart was pooled out from Graphql.bitquery, since there is not much of data from official aggregators, and the data can be wrong.

This is quite a volatile chart and I would take this data with some reserves. The number of DAUs went higher then 300k at the end of April 2020. While there have been reports on number of users on Pancake more than 100k, 300k seems a bit high. Also the correction is even higher going under 50k DAUs.

My personal thoughts about DAUs on Pancake is that they have been somewhere in the range between 50k to 100k. On a monthly basis they are probably more than one million now. 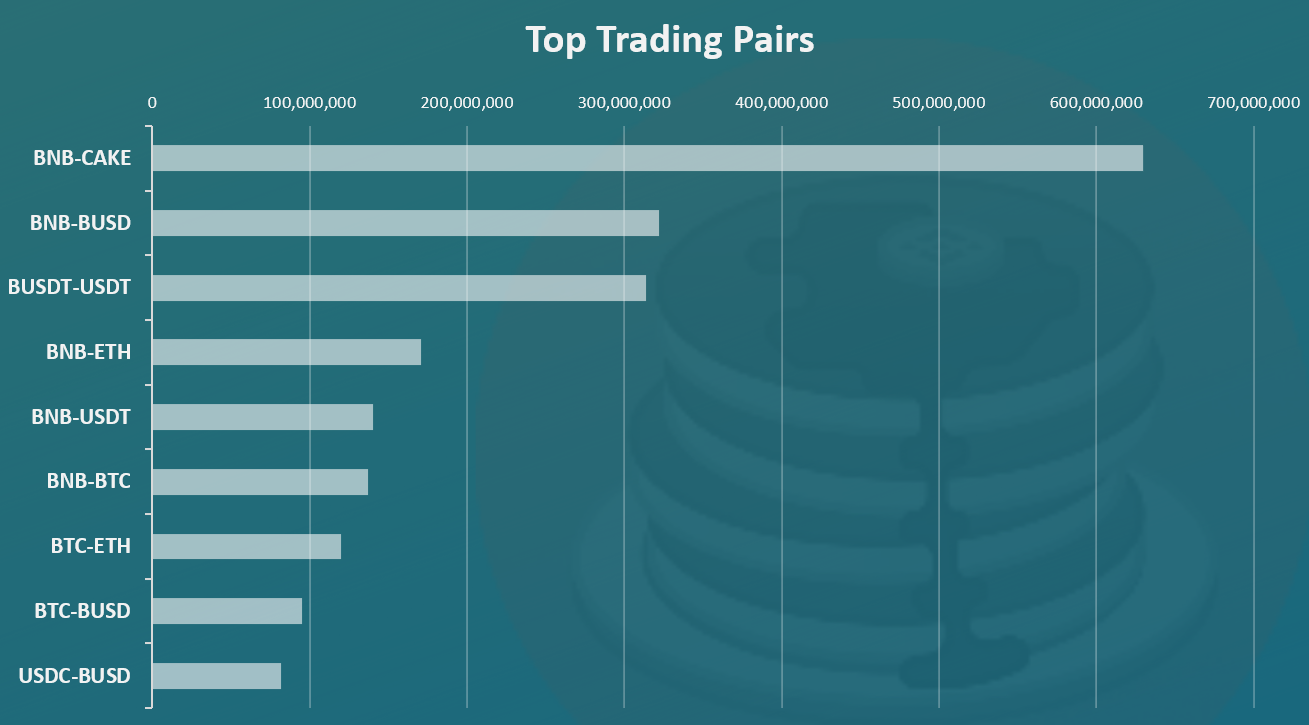 The BNB-CAKE pair is on the top by a lot here with more than 600M in liquidity.
The BNB-BUSD pair comes on the second place.

We can notice a lot of the top pair are with BNB. Out of the top 10, five are paired with BNB. This is locking more BNB and putting it to use. No wonder the price increase of BNB.

We can se the stables to stales pair in the top as BUSD-USDT, and BUSD-USDC.

Here is the chart for the CAKE supply. CAKE has a high inflation, but a lot of that is burned as well.

Its interesting that CAKE seem to be reaching a balance point in terms of the inflation. For example in May 2021, around 15M CAKE was added to the supply, on top of an existing 160M. In October 2020 more than 30M was added to a supply of just a few millions.

What the above means is that in the last nine months of its existence CAKE now has less then a 100% inflation and soon it will reach 50% inflation In defi 50% is low inflation 😊. But in the nine months of its existence CAKE has positioned it self as one of the dominant players in defi, using that massive inflation for massive growth, establishing a project with around 3B marketcap and ranked around the 40th spot. The statement from the team is that they want to be inflation neutral in the long term.

At the moment CAKE has 180M tokens in supply.

At the end the chart for the price. 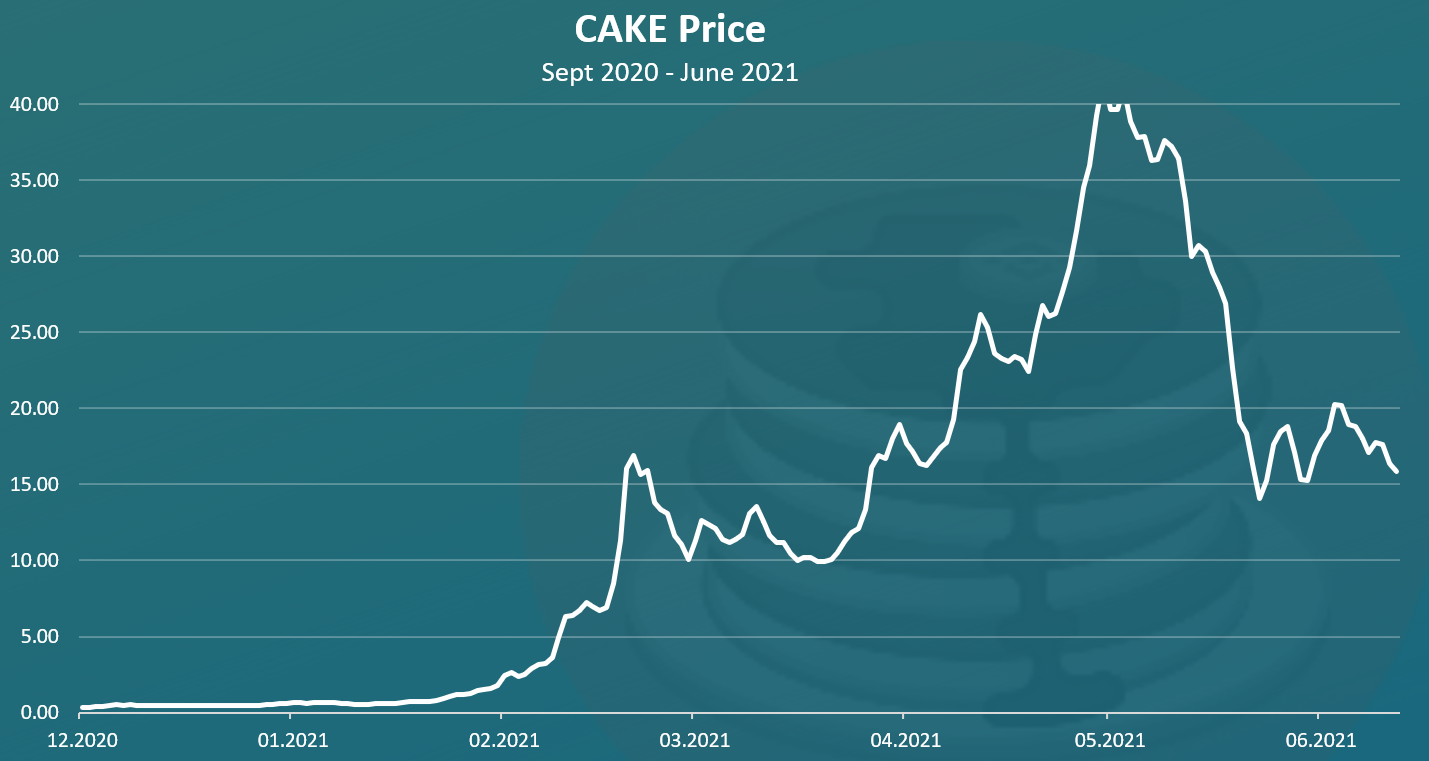 The interesting part about this one is that I can tell how fast users on crypto will change their minds very quickly if their "guaranteed" value proposition is not working anymore. Most of these users are after quick bucks and will ditch the system as soon as the quick bucks are no more.

It's something for people to be careful about before investing.

This is probably mainly the result of the bad marketing of Steemit. Steemit was/is advertised with the money earning opportunity, and that is mainly attracted/attracting the selfish and greedy people.

Absolutely true ... a small percent do stay though :)

Yes, those, who truly believe in the system, and have long term plans, and not just/only after the "quick bucks".

pancake is using more and more I have bought some too

@dalz! I sent you a slice of $PIZZA on behalf of @xplosive.

good to see that it has active development

In many ways PancakeSwap made DeFi accessible. I consider myself privileged compared to some of the folks who can barely afford a laptop/phone etc. Uniswap was completely out of my reach. BSC Dapps did a lot to help the small guys. I still don't have any CAKE. My DeFi is all in on CUB (which could be the next PancakeSwap)

This is the first time I have seen historical TVL data plotted as a chart. I have always wanted to see it. I know the data reside in the chain, but I haven't found a simple way to get it out and plot it.

Can you publish a cookbook on how?

Thanks!
I have used this api
api.llama.fi/dataset/pancakeswap.csv

I think it is doing pretty well considering BNB based swaps have taken a beating.

I wonder if CUB can achieve the same pricing pattern as Cake has? CUB probably has turned the dial up in terms of innovation...time Will tell

This really does show what can become of a platform that continually works to improve itself. Everybody looks at CAKE now like it is a no-brain success story when in fact, we all could have bought as much as we wanted under $1 for quite some time. At that point, nobody really wanted it.

The parallels to CUB could be striking down the road. If they keep innovating and improving, there's no reason it can't see $10 or more and become a major player in the realm of defi. With the LeoBridge and Kingdoms being added, they are slowly expanding their reach. As long as they keep a sharp focus on security, I think the future could be very bright. We've just had almost a 50% uptick in price in the last couple days. Could be just the beginning....

Thanks for collecting and showing us these datas.

I have to say I am quite disappointed with the user. TVL and volume numbers.

Burns are at the level I was expecting them to be but I am wondering if it can sustain a $15-20 price range now.

TVL has not decreased by a great number even after the price had dropped by big % in the cake which is a good sign for the potential. Personally, I am staking in Cake/busd pair. There is huge room for panecakeswap to grow and Ethereum delay is adding more opportunity to it.

That’s a great breakdown of the Pancakeswap platform and the numbers associated. Reblogging for the https://coin-logic.com audience and it will show on the front page rotating feed!