dalz in LeoFinance • 2 months ago

How is the activity on the Hive blockchains doing?
We will be looking in the numbers for activity, and not just in terms of posting but other activities as well, like votes and custom JSONs that are mainly driven by games. Before we continue with the analysis just a note on the activities. Unlike the good old Bitcoin, that has only one operation (transfer coins), Hive has a lot of them.

Usually when talked about activity on the Hive blockchain a lot of the users have in mind posting and commenting. Here we will be looking in the top 4 activities on the blockchain:

The above consist the majority of all the activities on the blockchain. The claim rewards operation also has a high number of activity, but we will leave out that one.

This post is in line with the post about active hive accounts by category, but here we are looking at the raw numbers of transactions made.

Number of Posts and Comments

Here is the chart for the number of posts and comments on the Hive blockchain. 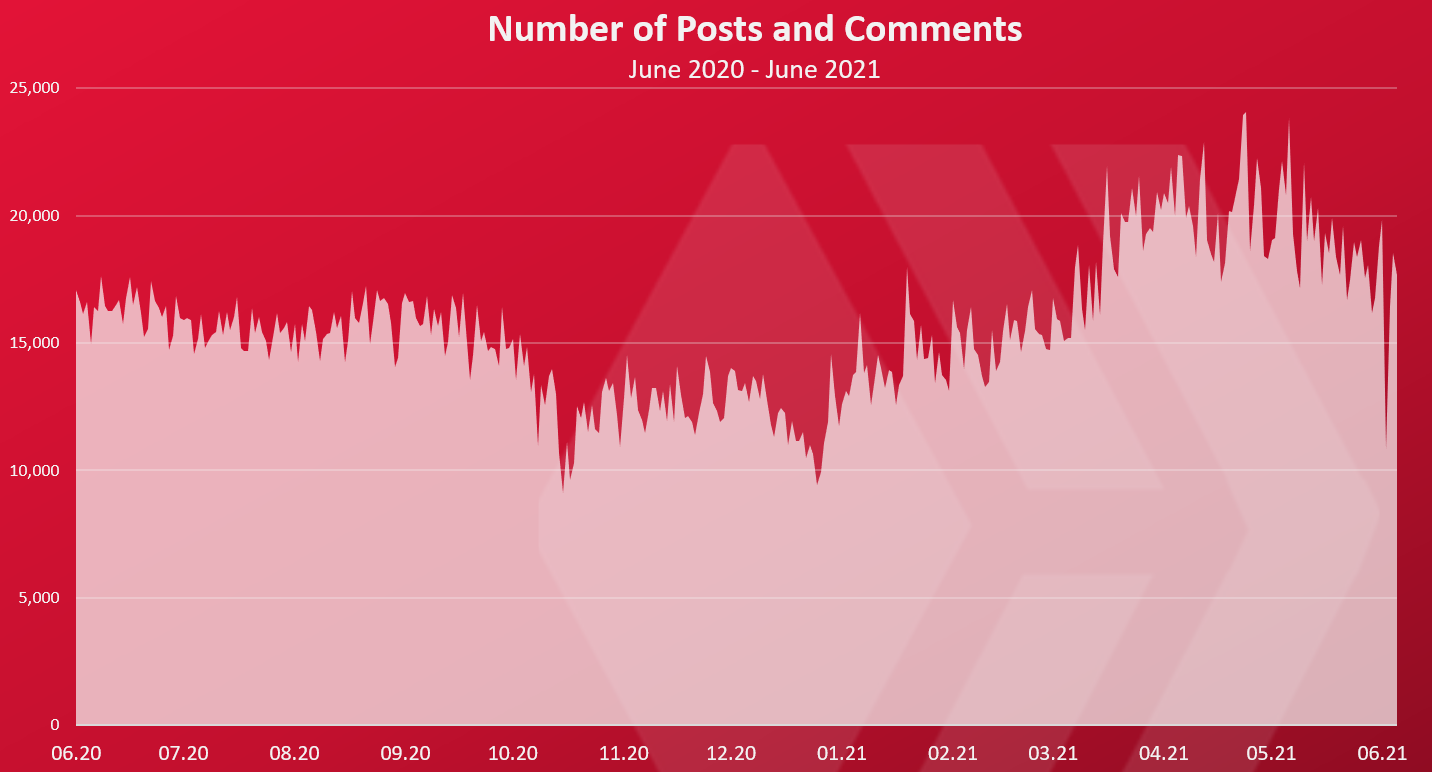 We can see that in June and during the summer 2020, the number of posts and comments was quite stable, around the 15k per day, then it dropped a bit in the period October to December. Starting from January the posting went up, reaching almost 25k post and comments per day in May 2021. In the last weeks the numbers are down again just below 20k.

The overall number of posts and comments on a daily basis has been in the range of 15k to 25k per day. Votes are one of the core operations on the Hive blockchain. That is how the rewards are distributed. The Proof Of Brain mechanism (PoB) 😊.

The number of votes has been quite steady in the period, compared to the price volatility. In June there was around 230k votes per day, then a growth to 250k, followed by a drop to around 200k per day. Starting with 2021 the votes increased to 300k per day, and a drop in the last weeks to 250k.

In the last year the number of votes has been in the 200k to 300k votes per day range. 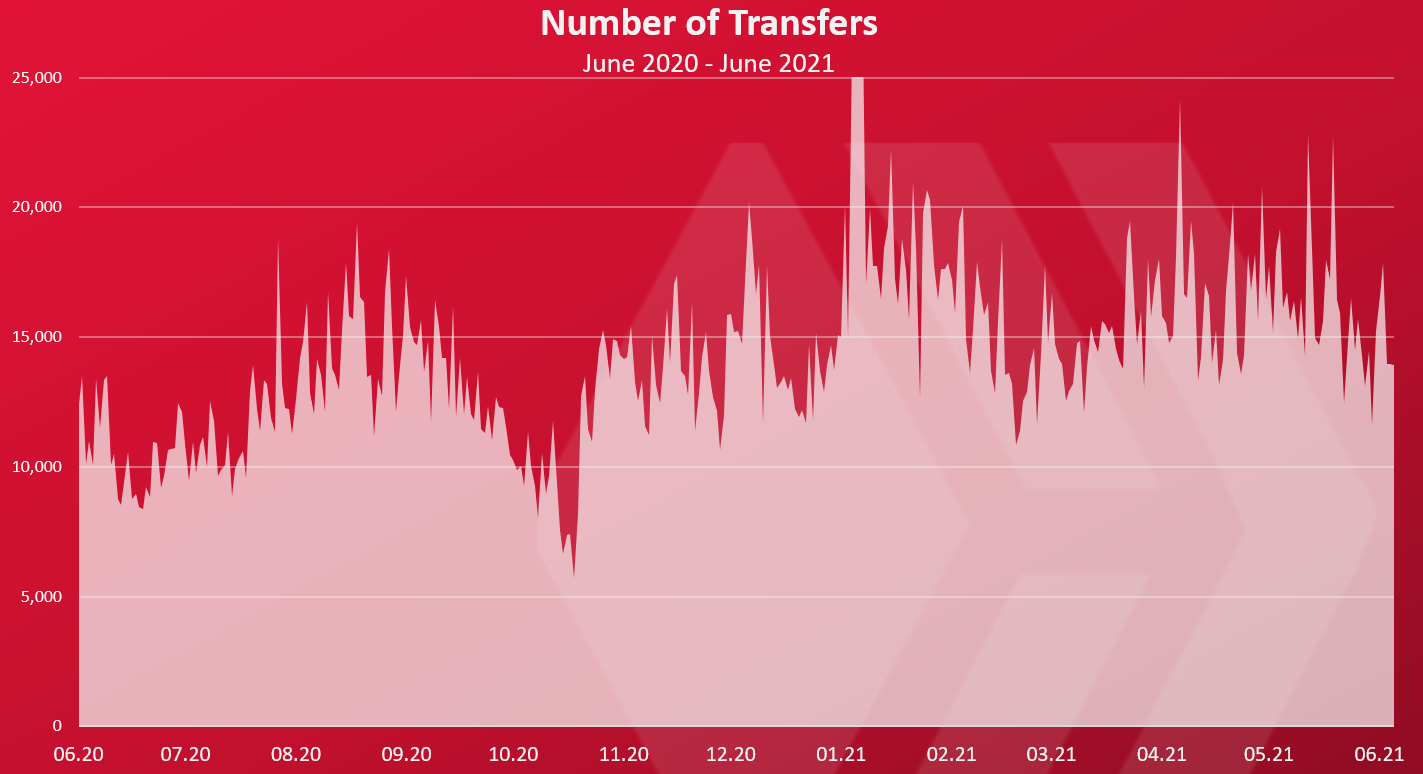 This is quite a random chart, but we can see an overall trend for growth. There has been around 10k to 15k transfers per day in the last year.

The chart for custom JSONs operations. The custom json transactions are used mainly from the games on Hive, with Splinterlands on the top. Custom jsons are just a text files, but unlike the post and comments, they are like sidenotes, and don’t appear as post.

This chart has a different trend then the others. It has a nice and steady growth all over the year. It hasn’t spiked with the increase of the Hive price, but it hasn’t drop eighter, but has performed with a steady growth.

The numbers has doubled in the past year, starting with around 400k and reaching a 800k transactions per day in the last days. As mentioned Splinterlands is the main driver behind these transfers, but the other games like Crypto Brew Master, Rabona, Rising Star, dCity, etc. are doing their part as well.

Well not quite overall but most of it 😊.
When we combine all the charts above, we get this. 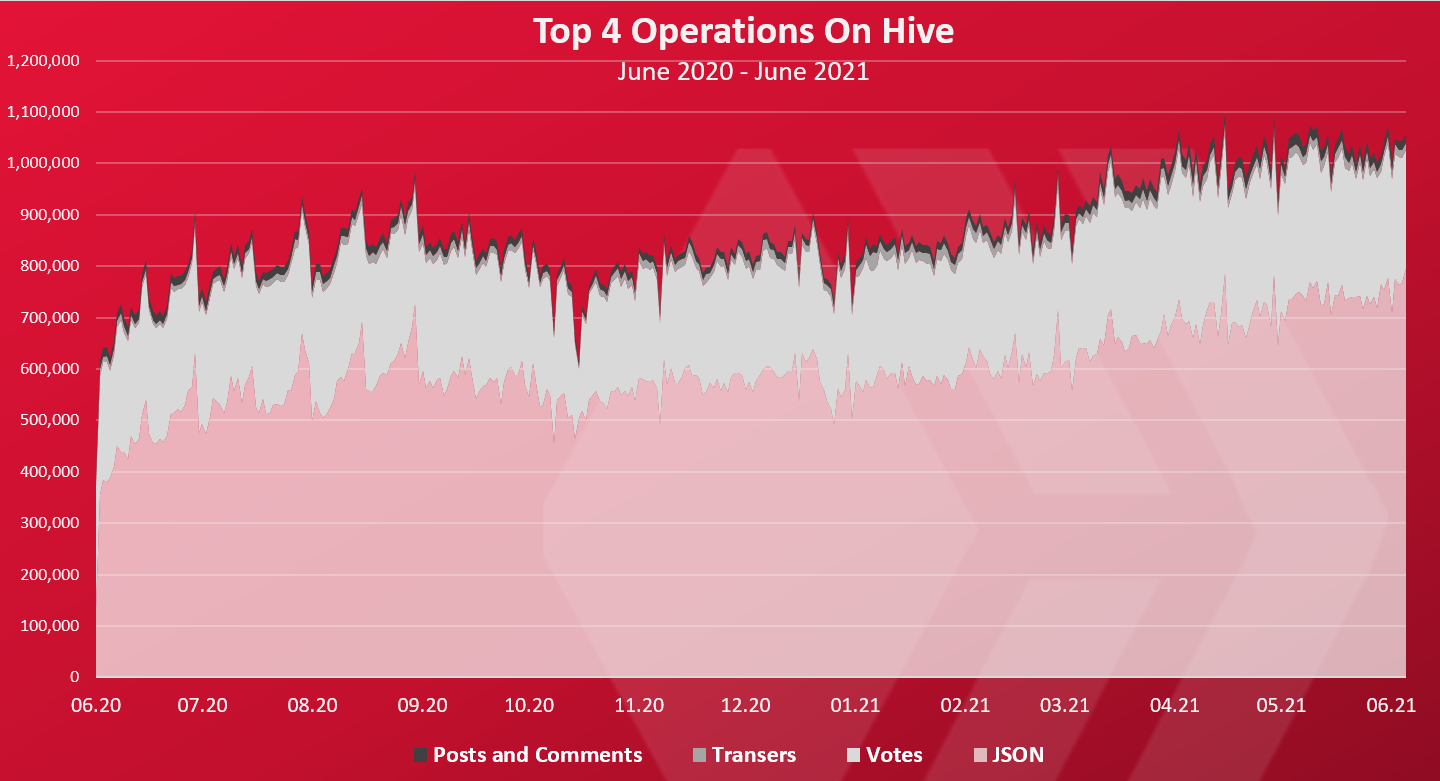 Although we should mention that the “weight” of these operations is not the same, so its not totally comparable. Posts have the largest weight, as they require a lot of texts and effort, unlike votes or jsons, that are usually a one click operation.

Overall, the activity on the Hive blockchain has gowned in the last year.
What is interesting it seems that the activity is not as volatile as the price action. It follows the price but not with a 100% peg. When the price dropped to 10 cents, there was still a lot of activity and when the price spiked to more than 70 cents the activity increased but not at factor of 7X.

Am quite relieved that the number hasn't dipped so badly since prices were sent crashing. Perhaps a big cause if this is the relatively stable value of hive. All in all not bad numbers

Good to see the overall growth of the network in the last year. Looks like it was a little dip for late 2020 but overall looking great as of now in mid-2021, awesome

Custom JSON are showing somehow a direction where the chain is going. Being a fast one with low fees it definitely can take some of the ETH users and why not, BSC.

Thanks for the report!

Its Splinterlands to blame :)
But yes, having a feeless chain that can store a lot of text is a great use case.

Seems that the blockchain is having a decent activity although in terms of market cap it is way below the top dogs.

These numbers are encouraging.

Soon that critical mass will be hit where real-world demand for HIVE reaches a point where price can only go higher to keep up.

We've just gotta keep building and creating on the blockchain like we are.

When I look at youtube numbers, views and monetazitions, you realize the full potential .
.

@dalz thank you for this amazing info you have shared with us.

Would you consider doing a report on the various OTC exchanges in the Hive ecosystem? Eg. Blocktrades, Orinoco in Venezuela. There are a number of regional OTC exchanges though I don't know if there's a comprehensive list anywhere.

though I don't know if there's a comprehensive list anywhere

This is the chalenge .... otherwise no problem

Hi
Thank you for the numbers. It is interesting that despite the low price activity is up. Steem monsters and now Splinterlands is a bright star in terms of activity. But it appears that DeFi brings the cash. If only someone can figure out something more sustainable then the current model.

Have you looked at the investment projects created on steem-engine by cryptomancer to see if there is any volume there? It would be interesting to see if there is a rise in activity in that non-gaming sector. @kyle is also building a lending platform of some type. These may be attractive projects fir outside investors and potentially help Hive.

woaaaah we are double BTC?! Why are more people not talking about us? We are a big fucking deal! And a whole lot less spam than steem.

Well they'll figure it out sooner or later, just imagine when we are 10x more than BTC. It'll be even harder to ignore.

It is interesting that, in spite of price fluctuation, the rise in activity is steadily on the upswing. The chart is rather consistent in terms of it trend. The increase in JSONs is really starting to take over.

What does this mean? Is it because more are now using Hive as a database by engaging in those applications that use it as such? I think so.

The key is going to be keep pushing this volume a great deal higher. Can some of these games become extremely popular? We will wait and see.

Splinterlands are the ones to blame for the jsons mosty. But they are setting a great example. A lot of diferent things happening now ... 3Speak should be amazing :)

Hi buddy, just curious why have you delegated all your spt to dalz2

Becouse it is my alt for dedicated spt content...