costanza in LeoFinance • 7 months ago

I wrote a post having a closer look at the Leo Miners 2 months ago (Link) and convinced myself to get in on them. I have been keeping some data on the returns, these are the results...

In that previous post, I came to this conclusion:

So I bought those 100 LEOM for 200 Hive (33.63$ at the time) and continued my way in buying daily also keeping track of the supply as I was seeing it going down. I didn't want to instantly commit more, so I figured I had some more time which turned out not to be the case as it was completely bought up in one day by someone.

So I was left with the 170 LEOM that I managed to buy (at least it's something) and continued tracking the results on a daily basis. From what I understand, each LEOM that is staked has an equal chance of mining 1.06 LEO on any given day and that chance is based on how many LEOM are staked in total. The LEO is automatically paid to your hive account. These are the results of mining exactly 50 days with 170 LEO Miners... 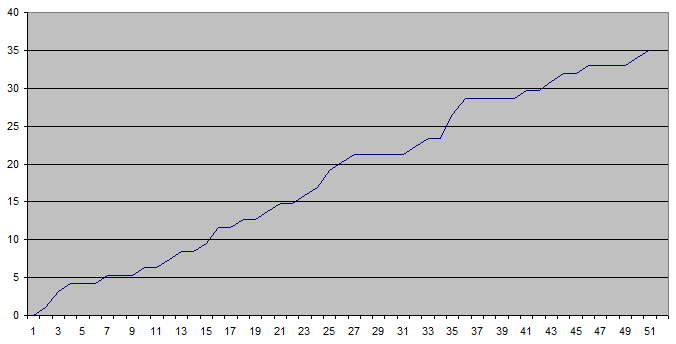 After the LEOM supply was sold out, the price quickly went up a lot. Right now on Hive-Engine they are going for 7.94 HIVE with is almost x4 of the original price! 1 Hive is currently worth $0,127451 USD according to Coinmarketcap that means the 170 LEO I paid 57.43$ for now require a 172$ investment.

Is it worth buying more LEOM ?

The main 2 main factors to come up with a calculated answer is where the price of LEO will go and if the mining rate will hold up.

Right now 146.812 LEOM is Staked of the 149.999 LEOM Circulating supply which comes at roughlty 98%. This means there is no danger of the mining rate to drastically drop. It does show a 1 Billion Max supply but from what I understand, there is no intention to ever release more LEOM Tokens. In that regard it's not completely trustless and it remains part of the estimations.

Price of LEO
The price of LEO has been on the rise despite the Wrapped LEO hack some weeks back after which it recovered (see graph below).

There is quite some hype and speculation around that it will be worth a lot more (some even call 30$ LEO or more). I tend to go by the numbers and what actually gives the token value. I believe this mostly comes down to the advertisement revenue along with some of the other burning mechanics. With a Supply of 6.271 Million LEO, the token and the platform is currently worth around 1.2 Million Dollars. Looking at the latest add revenue numbers in October they came in at 713$ (See Post) where the month before they were at 555$ so nice increases are showing.

Going from that 713$ not counting any kind of speculation of massive growth it roughly comes at ~10.000 Dollar from actual revenue right now which comes at 0.0083% of the total 1.2M Marketcap.

Of course, there is a lot more to it than just the ad revenue and the numbers across the board are growing like crazy (See LeoFinance Weekly Stats Post) when it comes down to Users, Active Posts, Comments, Ad Revenue, Price. There is also a lot more in the pipeline to be released on the platform so those are all excellent signs.

However, as the price continues to go up, less LEO will be burned (unless the earnings used to burn LEO rise equally fast). This will make it so that the supply will likely start increasing at a quicker rate inevitably putting some pressure on the price.

LEO Miners were a great buy 2 months ago when the supply was offered at 2 HIVE for 1 LEOM while the growth of the Leofinance.io platform at the time left a lot of room for a LEO Price increase. By now, the price of the LEO Miners has gone up x3.6 with the price of LEO having gone up by +65% which feels like a lot of the juice is out of it. Most of the token value currently also is based on speculation of future growth which makes it all more a gamble. I personally will just keep my 170 LEOM staked and continue to stake a good part of my LEO tokens growing my account in anticipation of seeing the platform grow over time as it has a lot of things going for it.

For everyone who is blogging about Crypto and Finance related topics, I could recommend giving the Leofinance.io platform at least a try!

Quite great mining results from both the mining itself and the price increase of the miners. I am planning to visit my mines tomorrow and see where I am standing and calculate an overall ROI between initial investment and the added value from both mining and miners prices. I like very much the mining angle from LEO Finance, just wished I bought more when the price was just of 2 Hive!

In hind site, 2 HIVE was a steal. I wish I had learned about this earlier. But I may still buy some.

just wished I bought more when the price was just of 2 Hive!

Haha, the same here. The person who bought the entire supply all at once did an excellent deal.

Back of fag packet calculations suggests that 3.5 increase in price means that 80% ROI will come down to around 25% ROI especially with more miners being bought, and that's roughly the return you get with just buying and staking LEO!

Might just be worth buying a few more, and diversifying. Personally I'd just buy the raw stuff! LEO that is!

Indeed, 170 LEO Miners will mine 1 LEO in roughly 1.5 days if the calculations are correct that is. That's probably the most straightforward way to looks at it for those who wonder about the returnr.

That's even easier - I did actually buy one more. Just the one!

Thanks for the tag @reviseleo. I'm with you on this one I think . . . I'll stick with buying LEO itself. Not sure about staking. I'm a long time out of the loop and have a lot to learn since the move from Steem to Hive.

For example, I saw your tag in Gina which meant when I clicked on it I was taken to Hive.blog. If I followed you there, would I also be alerted to your posts on Leofinance? These "new" interfaces/communities and usernames have me very confused.

Now we've got a linear curation curve on LEO you get an equal return whatever and whenever you vote - so here it's very easy in terms of curation.

Well I guess GINA would do that - if it's set for every post, but it wouldn't filter my posts - every post you make from LEO is still posted on Hive too.

They all run on Hive - the secondary tokens are just a layer on top. Although TBH I'm now starting to think of LEO as the primary token!

Hmmm... I was dead set on starting to build a stash of LEOM miners yesterday. But this makes me wonder. You are saying that the return is still around 100% right? That is still pretty good return. I'll have to think about this some more.

Ah, thanks. Any idea how that compares to curation's returns?

I have no clue about that but it should be not that difficult to calculate since curation has gone back to a linear scale.

Awesome statistics. Certainly, those who picked up the miners at the original prices would hit over 1000x profit as LEO begins to moon towards the $1 mark. Sooner, mining LEO would be the cheapest way of earning the token.

Great analysis! Thanks for sharing your results! 2 $Hive per miner was an awesome bargain, and I agree with your observation, but, who knows, maybe this price of 7-8 $Hive per miner is still a good offer... We will see in the future!

The 2 Hive for 1 miner was indeed a great deal, especially when looking at risk/reward also given the price of Hive. Right now the speculation level is just way higher. It's not something I would gamble on but at the same time also not something I'm willing to sell.

How d'you work out the returns on your LEOM stake btw - i can't find any reference to receiving anything in my wallet or anywhere?

I used to receive regular 'mining rewards' but I've seen nothing recently? Not a thing..?

The mining rewards are still showing in my wallet when they happen. I just quickly check each day adding it to my tracking sheet.

Mine have just disappeared recently, but according to some Python analysis i've still be getting them!

this should show it as well... in the leo tab of the account that holds your miners

You mean there's a tab for that?!? Thanks really useful to know!

this should show it as well...

Congratulations @costanza! You have completed the following achievement on the Hive blockchain and have been rewarded with new badge(s) :

I was lucky enough to end up with a mix of LEOM and LEOMM but it comes to 453.304 miners
90% was bought long before the moon I have gotten a lot of returns but I like having 3 pillars of leo income