behiver in LeoFinance • 4 months ago

Just 7 days ago I posted my investment into crypto games for the Street Fighter Cards NFTs collection on WAX Blockchain. The smart idea pointed out at that time was that the supply of the cards would be given by a 24 hours selling which would translate into all time 1st series release. I considered that genial as having a time based supply is much better than throwing a big number of collectible which would spawn upon a very long period of time and let the buzz cool down. Thus hunting for your prize, making sure you are there and getting it brought some fresh energy into the sale and raised the moments once that finished. 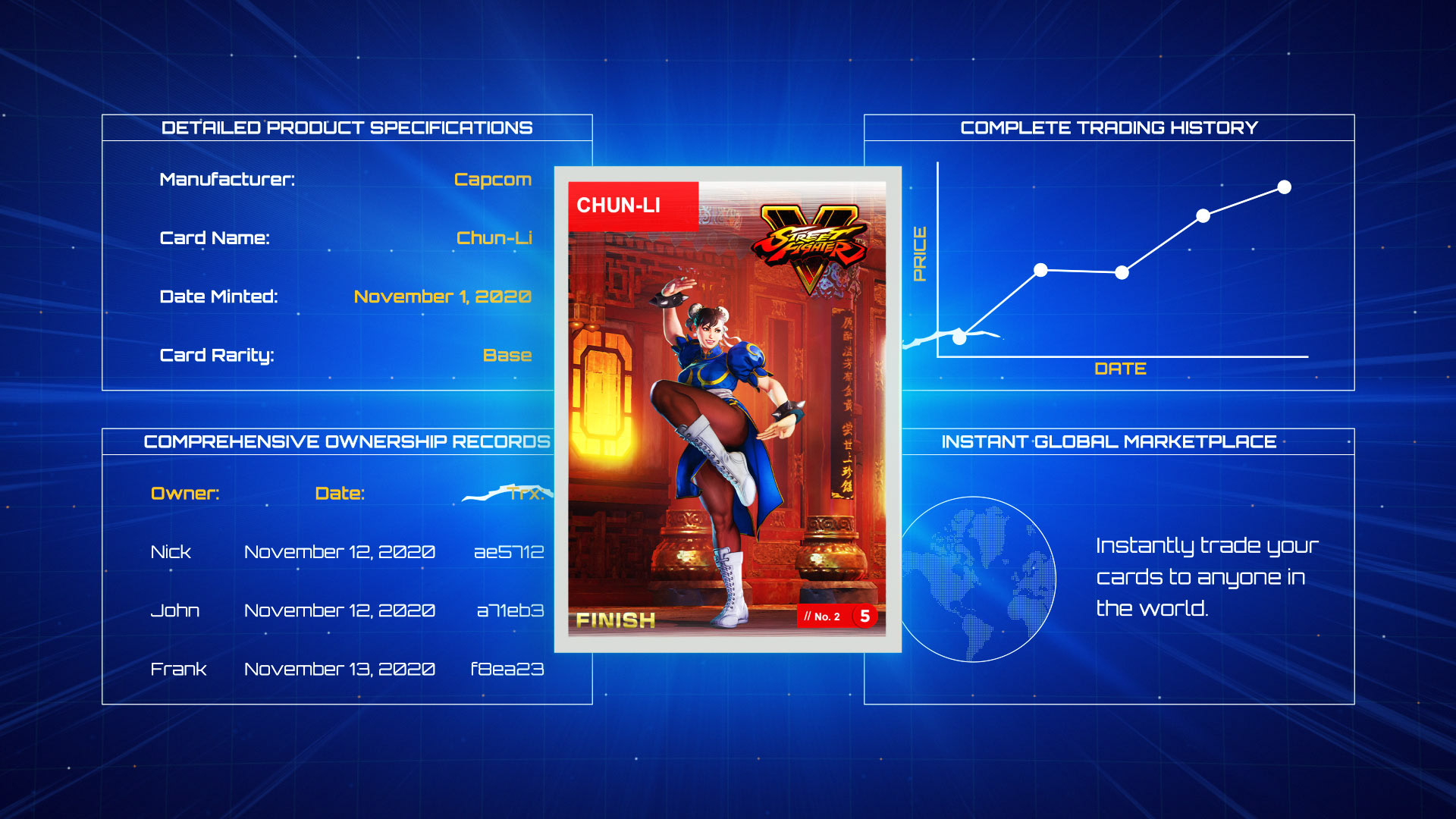 Based on the Capcom results published after the sale it seems that it was a total success and they could capitalize upon the chosen time based strategy. There were put into sale Standard packs consisting of 10 NFT cards and Ultimate packs consisting of 60 NFT cards (giving a 10 cards bonus or 20% for the same price per 10 cards unit). The sale outcome was of 27,000 Standard packs valued at $269,000 and 35,000 Ultimate packs valued at $1,750,000 thus giving more than $2,000,000 in the sale. This is quite impresive and it shows that Capcom tapped into the right NFT market and everything run smoothly and without any hiccups.

My journey into the NFTs world started few weeks ago and it assumed initially to participate in some airdrops on the WAX blockchain like Cryptomonkeys or Bitcoin Elite which simply showed me the potential of this market. Even if these were free airdrops they hold quite some value considering the limited supply for some of them and I think in total these are values at few hundred dollars. If this doesn't gets you excited for something free, just being at the right moment and claiming your NFTs probably you don't have yet the big picture. 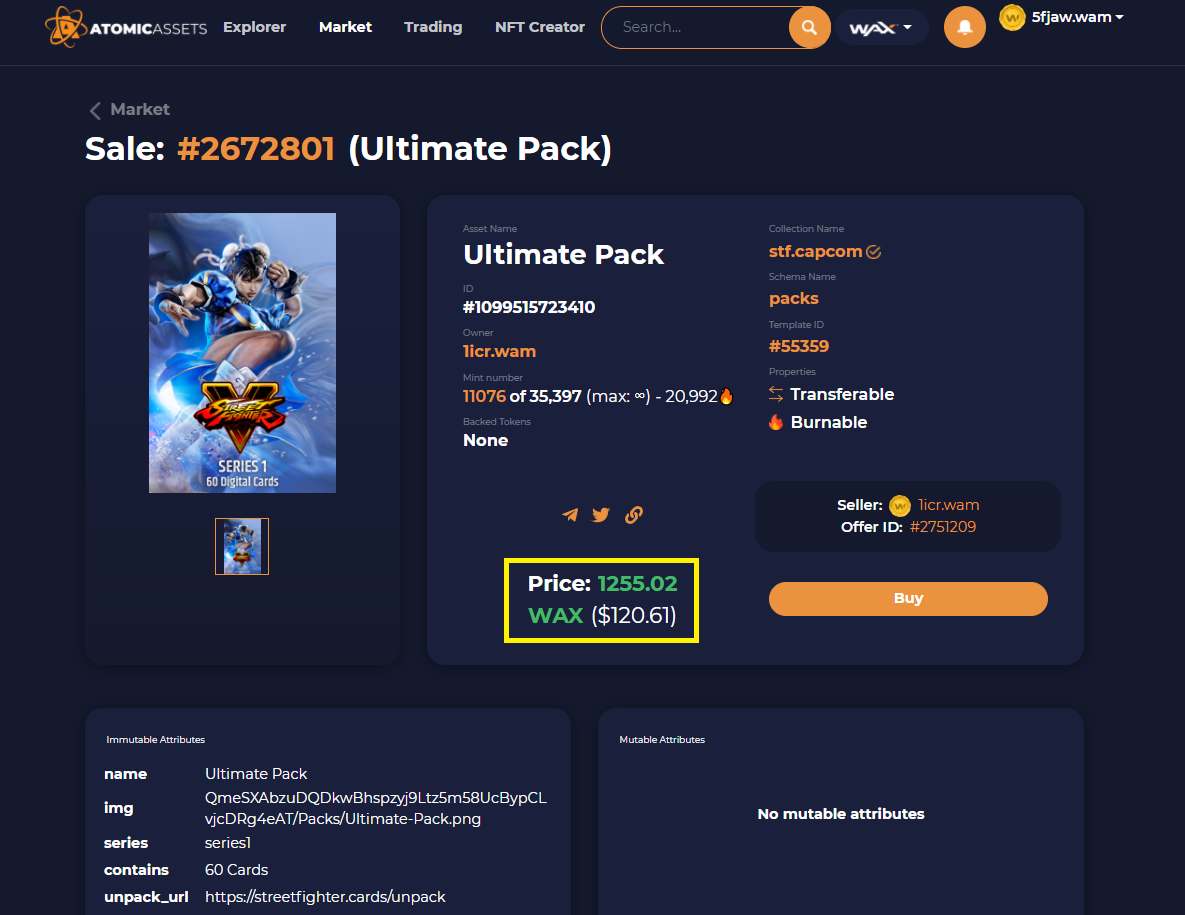 Going back to my investment into the Street Fighter NFT cards and considering that I am in the beginning of my journey, I've traded safely and invested $100 in 2x Ultimate Packs of $50 each. I held the Ultimate Packs from the day one and will continue to do so until I will put them on the market. The packs are trading now at a minimum price of $120 each and I have already more than doubled my investment. As I have tracked closely the evolution of the prices for the packs, my strategy would be to exit the market with a selling price somewhere in between $150 - $200 per pack. This will ensure me a final return of $300 - $400 which would mean somewhere in between 300% and 400%. This shows the potential of famous collections and that NFT cards are a phaenomenon of their own which moves from traditional assets to digital ones and still hold value. And if I am to think over this a little bit more being able to be integrated into games or other dapps they might hold more value than the traditional collections. I am preparing for the NFT domain to keep on growing and provide new art form to collectors as well as have DeFi instruments for any avid investor. Better be in the space and capitalize on the early opportunities!

Very nice review! I did a post about this yesterday as well. I think you are smart waiting for the prices to go up. I think a 3x to 4x return is very likely.

Right on that, getting a x3 investment return I think is good enough. And with that I can take my initial investment out, take a 100% profit and use another part for some new collection cards. And afterwards repeat that all over again!

The sad thing is, it doesn't happen as fast as you would hope. At least on the WAX side of things. Not yet anyway. I am still sitting on a ton of card packs from previous releases that I am waiting for the prices to get back into acceptable levels again.

Does the creator of the NFTs get a commission every time an NFT is sold?

No, it gets the price for the initial sale. As the ownership moves when performing a sale, the new owner will get the requested price and so on. Still, there is a 10% commision on Atomic Hub that the platform will take from any sale.

I tried to list an item and looks like the creator gets a fee every time the NFT is resold. It is called "collection fee", and "marketplace fee" I think is the fee for using AtomicHub. What I don't know is "tokenomics fee", but probably refers to a fee to be distributed to stakers or to be burned.

For AlienWorlds the Colletion Fee is 1% and for Crpomonkeys is 7%. You can check here https://wax.atomichub.io/explorer/collection/crptomonkeys Indeed you might be right on that. As I didn't create any NFTs nor do I have the artistic talent to do so, I have overlooked that aspect.

Thanks for this review. I'm new on Leo Finance and I jumped in here to find something to learn about the NFT hype. It's so cool that the first one I find is such quality article!

Congratulations @behiver! You have completed the following achievement on the Hive blockchain and have been rewarded with new badge(s) :