What strategies should we use to attract users?

vempromundo in Proof of Brain • 2 months ago (edited) I was recently in a conversation with @ralexandria about the best approach to attracting new users. I think this debate has surfaced several times in the last 4 or 5 years from the old S******t network to our new Hive.

When I talk about Hive and its tribes to someone, I often have to explain the concept of cryptocurrency and blockchain, because they always ask "but why would they pay me?", "who is paying?", "this money must come from someone place they would not give free money". This was more than 30 minutes of conversation.

An easy argument I try to use is "Why shouldn't they pay? You use facebook all day and all the profit returns go to the company's pockets and nothing for you who are there producing content and generating engagement for their platform without get a penny." This argument often makes him understand the basics that he actually generates content that should be rewarded.

As I approach people who generate content, they know that their material produced has a value. I don't invite people who won't add anything and will just make an empty post with an image, thinking they deserve any amount for replicating something that's already in the mainstream.

But I still think that my strategy is very limited, it manages to capture specific people and not mass adoption. Which in a way would be good for the community, after all a boom in users would reach more places like twitter, instagram, facebook, and with that a possibility of some investor.

In the @penguinpablo report, the amount of accounts posting to Hive is around 4,000 users, with an average of 300 new accounts being created. 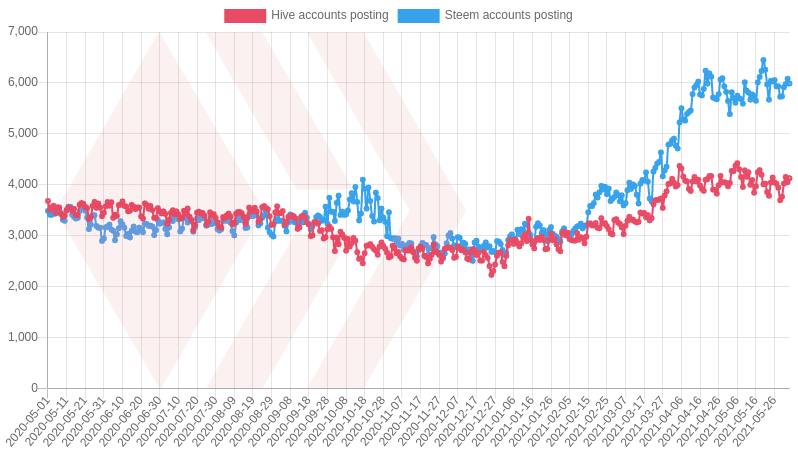 The number of users should be growing, otherwise what are these new accounts doing?

I wanted your help in the comments so that we could put together a guide on how to attract more people to the community, and keep them around.

Interact with others on the Daily Lottery Talk, there are more than 30 POBs drawn every day.
And best of all, it's FREE

I'm still scratching my head as to why this platform isn't poppin' off and doesn't have half a million active users on it daily. Not really, it's quite clear why it doesn't have much more users, anyone worth their salt has already ran far away from this blockchain.

(don't mean to be a dampener, just venting)

Maybe people sense something is 'wrong' with the system - on an intuitive level - I did early on , but ignored it until i could put my finger on it...and here we are..

Quite possibly, when the emotions associated with "earning money" aren't there to cloud rational thinking, it doesn't take many questions and answers before the word "decentralisation" turns to dust.

it would go some way to explain the unbelievably massive uptake (and retention) on steem/hive...er...err..er...ooooh...

I feel there is not proper marketing by the developers and the community. When we up our marketing and promoting game, we will achieve that milestone

Hi @readthisplease,
it has nothing to do with marketing, I think.
When people find something cool, easy to access and a friend recommends it, then they show up all by themselves. The beginning of every internet platform was just that, if you ask me. Also, it must be easy to understand for the average person.
This has neither easy access, nor is it easy to understand for people who never heard of kryptos or blockchain. People are usually too impatient ... this could be a trend but also chances are that it won't. Who knows?

Apart from that, a lot goes wrong here. But you will figure it out yourself.

I believe the first few days on Hive are crucial for user retention. I remember I was quite intimidated by it when I first got here. Introduction posts help, but it's not really clear that you should do that.

I think if we had a way to help with onboarding those people and guide them through their first steps, it would help a lot

You are right. We need to help onboard new people. My brother I introduced few months ago abandoned the platform after his introduction post because he felt intimidated. He also complained he didn't receive an encouraging welcoming as there was zero engagement on his post.
I tried guilding him but he lost interest.
What about others with no one to guide them?

I'll be honest about what happened with me. I invited friends and family who are content producers in their own domain and they liked the idea of Hive immediately. But they saw the trending page and the corresponding content.
They found it nerdy, esp the crypto posts
Some of the content was really lackluster but had huge payouts

They kind of lost motivation.

My suggestion would be:

Well hive can be complex, but then the whole system feels attractive enough to maintain User's retention. I guess it probably boils down still to marketing and having external investors.

Steemit or Steem has a token doesn't have much uses outside of the general blogging platform. Maybe some gambling applications and a few small games via tron. It's mostly for farming rewards and if you're just focusing on posting, the rewards for low effort posts are much, much higher on Steemit.

That said, the Steem has a few big accounts who control their selling which despite the outsized rewards helps to control the supply of Steem and thus the price. Steemit also does a lot more promotion than Hive, which probably explains the higher activity there.

I'm not sure Hive could ever be ready for mass adoption with the way it is right now. There's that Internet law that 90% are consumers and only 10% are content creators. But on Hive, everyone tries to be a content creator in order to earn the rewards.

Anyway, that's a really long roundabout way of saying that I don't have any good solution. No easy fixes here.

Answers are easy - but asking the right questions is the tricky bit.

The questions that need to be asked are the very questions that those liking the status quo, never want to be aired..(see my downvoting for the last two months as perfect example)

It's way too complicated. If you can't sell it in an elevator pitch, it can't grow viral.

The use cases are amazing, but it takes months to understand and nobody is going to talk about it.
It's very transparent! I won't go around talking about my blog to friends, if it takes people two clicks to check my networth.

I was lucky in that I didn't have to 'join up' as I was gifted ths account already set up. From what I've seen of the join up process I probably would have been scared away by that alone. Once in it is such a difference to the other social networks that it again takes some effort to find your feet. You can't just click a share button and think your work is done, Hive actually wants us to do some graft and produce 'content'. I was doing that anyway somewhere else so it shouldn't have been much difference to do it here but it is.
I hear there are plans to make Hive more user friendly which for me will be the way to drive more people here as long as it doesn't become LIKE facebook instead of an ALTERNATIVE to facebook I think the user-friendly route is the way to go. I've never been a big money-maker and if that's the attraction you'll attract the wrong types.

Just be friendly to new users, reward them with appropriate upvotes though they do not make good articles as long as the articles are original. Spread the wealth as large as possible . Votes are not only among popular authors. Joining tribes are to get chance to accumulate wealth. Why do not all users compete in hive? Hive is too big, there are only few whales. If in POB there are many middle rich men, those middle men will be the engines that drive POB to grow. We do not have to rely on whales.

I have no idea but the point folks gst rewarded for content unlike FB and others never really worked, even before steemit on easy to understand platforms. Blockchains and keys are difficult to understand for many, big hurdle but I also feel the anti moos vs bad bitcoin and blockchain plus a newd to be where all your friends and that you can there bash celebs directly.

I think we need a huge community, less hurdles to understand usage and how they can change crypto to fiat. And we need use cases, games is good, real b2b cases perfect, that is valid for all blockchains out there though